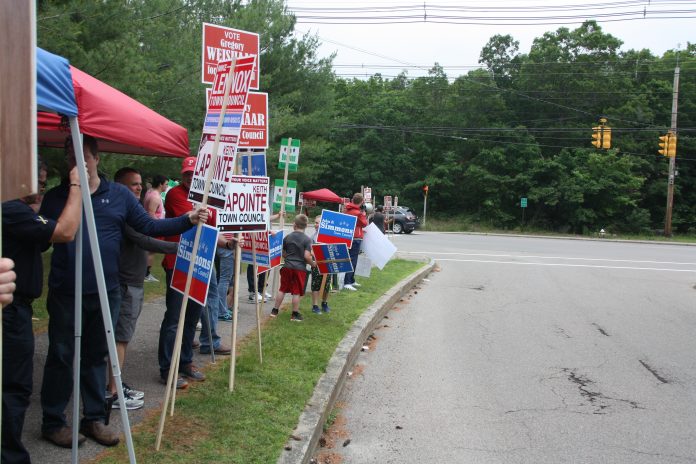 The midterm elections are less than a month away, and the Secretary of the Commonwealth’s office says there are more than 1 million mail-in ballot requests.

Dolan, who has overseen elections for more than 15 years, said the upcoming election could see turnout akin to a presidential election, citing the high demand for mail-in ballots as evidence.  In Massachusetts, no-excuse mail-in voting is allowed under a law known as the VOTES Act, passed by the legislature and signed by Governor Baker in June of this year.

Dolan said the increase in voting by mail would cause in-person turnout decrease this year, due to a quarter of voters choosing the first option.

“There have been some who are vocal about voting in person, but there are also those who want to vote by mail,” said Dolan. “We just have to do what they ask and give them their choice of how they want to vote.”

Early voting for the midterm elections begins Oct. 22, and Dolan is preparing the voting machines to read both mail and in-person ballots. The test will require the machine to scan 50 ballots in total, with 25 being submitted at the Town Hall and the other 25 submitted by post.

“We will need to get the memory sticks before we do any of that,” Dolan explained. “Once we do, we will make the test deck to ensure the machines are counting properly.”

Dolan said her office has been working diligently to recruit poll workers for the November elections. Her staff processes the ballots when they are placed into the drop box and send them to the polls all throughout the day.

Across the United States, many election officials have been threatened by individuals who claim there will be occurrences of voter fraud during the election—a line used by former President Donald Trump, who has repeatedly claimed the 2020 election was stolen despite evidence showing otherwise.

Dolan said her office has not received these telephone calls or threats.  She said those working as poll workers and election staff have nothing to be afraid of in North Attleborough.

“Absolutely not,” she said. “No one has been calling us regarding voting and irregularities and we have not been threatened in any way.”

In comparison to other states like Georgia or Pennsylvania, Massachusetts does not have any competitive Senate or House races this election. Regardless, many voters in North Attleborough appear to be excited to vote in the Governor’s race between Attorney General Maura Healey (D) and former State Rep. Geoff Diehl (R).

The most competitive race is for the office of Bristol County Sheriff. Incumbent Republican Sheriff Thomas M. Hodgson, who has been in office for more than 25 years, is facing a contested race against Attleboro Mayor, Democrat Paul Heroux.

Both candidates say they are canvassing and campaigning aggressively, and acknowledge they have to earn voters’ attention as their race may be seen as a low priority for some voters compared to the Governor’s race.

Holly Robichaud, the Hodgson campaign’s spokesperson, said the sheriff is always accessible to voters and has been campaigning with Republicans in the area, such as State Rep. Jay Barrow of Mansfield.

Heroux said he is balancing his schedule as mayor to continue knocking on doors and bike around Bristol County to engage with voters.

“We are doing all the traditional elements of a campaign,” Heroux said. “Mailings, knocking on doors, advertising, we’re doing it all.”