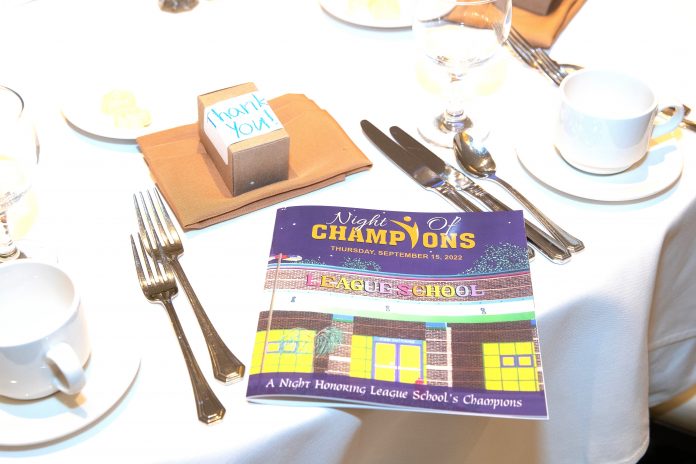 Held on Thursday, Sept. 15 at the Four Points Sheraton in Norwood, this year’s Night of Champions Gala brought together over 220 League School advocates in honor of the supporters, teachers, and staff of the school and its mission of helping students with autism develop to their fullest potential.

“Your dedication speaks to the sense of urgency in providing people with disabilities with the resources needed to learn and grow in a caring and respectful environment,” said the event’s emcee and Board of Ambassadors member, John Meterparel.

Student Richard Hidalgo received the loudest applause of the evening. During his five years at the school, he has had the chance to gain a variety of vocational skills while working at Big Y, with animals, and at a hotel.

“I’ve enjoyed my time at League School and look forward to graduation,” he said.

Board Chair Roger Lockwood noted that Hidalgo exemplified the reason for supporting the school and attending the Gala. “It’s all about the kids,” he said. He commended the work of members of the Board of Ambassadors who promote the school, accept special assignments, and engage in the school’s mission.

Nancy Vetstein-Hershfield, daughter of League School founders, Leona and Dr. Arnold Vetstein, presented the Vetstein Award to Sammi and Doug Robertson for their demonstrated commitment to helping students with autism live to their fullest potential. The Robertsons’ foundation in honor of their son – Bailey’s Team – has provided financial support for assistive technology that helps League students communicate. Sammi chairs the school’s Board of Ambassadors.

“Twenty years ago, one in 10,000 individuals were diagnosed with autism,” said Sammi Robertson, Chair of the school’s Board of Ambassadors, and along with her husband, Doug, the recipient of the Vetstein Award. “Today, the Centers for Disease Control is reporting that one in 44 children will be diagnosed with an autism spectrum disorder. The League School is a wonderful and necessary program for individuals who cannot find success at learning in their own school districts.”

Board member Ron Katz presented the Community Service Award to Cox Engineering for their loyal support of the League School. He noted that Cox Engineering had been a primary sponsor of the school’s annual Fore Autism Golf Tournament and has increased awareness about the event and the school. Cox Engineering Chief Operating Officer, Neil Johnson, accepted the award on behalf of the company.

Larry Sauer presented the Directors’ Award to MAAPS, the state’s special education trade association, for going above and beyond in supporting the League School and its mission.

“The advocacy that MAAPS began doing at the beginning of the pandemic has not stopped,” said Larry. “Elizabeth Becker, the Executive Director, and Janine Brown-Smith, Special Education Attorney, have spent countless hours and many late nights advocating, lobbying, negotiating, and fighting for our schools — which in the end is fighting for our students. Their work has brought hundreds of millions of dollars into the industry to support our work and children.”

Upon accepting the award on behalf of MAAPS, Elizabeth Becker noted how League School and other special needs school staff provided valuable in-person work throughout the pandemic. As special needs educators were often underpaid, MAAPS made a significant push to increase state funding for staff recruitment and retention. Elizabeth, who attended a Chapter 766 school, praised the school’s teachers and staff, “Thank you for the work you do and for making a difference for kids like me.”

At this year’s Night of Champions, Sarah Lussier received the first Dr. Frank A. Gagliardi award for her dedication and commitment to the school. The Board of Directors established the award to honor Frank in retirement and recognize his contributions to the League School’s growth. A board-certified behavioral analyst for the Transitions Program and former head teacher, Sarah exemplifies the ideals that the award recognizes.

“Sarah has proven to be professional, knowledgeable, and organized, oftentimes in difficult situations,” said Director of Education Patrick Fuller, who presented the award. “I cannot think of someone more deserving.”

“It’s an honor to receive this award in honor of Frank,” said Lussier. “I’m lucky to have had the chance to begin my career at League School and thank all the families for your support.”