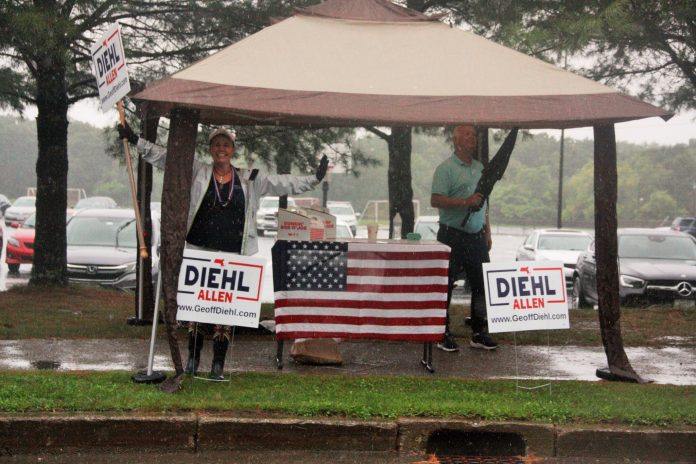 The day of the State Primary was dreary and wet, as rain pelted the streets and highways of North Attleborough and the rest of Bristol County.

For Attleboro Mayor Paul Heroux, the night of Sept. 6 was one of joy rather than gloom, as he secured a victory in the Democratic primary for Bristol County Sheriff.

In total, Heroux received 18,141 votes, while his opponents, Fall River attorney Nick Bernier and former Somerset Police Chief came in second and third with 14,583 and 10,741 votes each.

“That was the closest race I’ve had to date,” Heroux said. I’m glad the primary is over.”

The communities where Heroux performed the best are in the northern part of the county.

In North Attleborough, Heroux received 1,394 votes to Bernier’s 498, and in his home city of Attleboro, he won 2,582 votes. Heroux also did well in the southwest region of the county, besting Bernier in New Bedford by a margin of 497 votes. He said the next step is to keep campaigning and talk about his policies for jail system reform—as he looks ahead to a November showdown against 25-year incumbent Sheriff Republican Thomas Hodgson.

“I’m looking forward to the next two months of working hard to get my message out to the voters of Bristol Countyabout why it’s time for change and the positive message I have about running a more modern jail system,” Heroux said.

Bernier, who won his home city of Fall River, congratulated Heroux on his win but said he would not endorse him in the general election.

In a Facebook post dated Sept. 7, Bernier criticized Heroux’s door-to-door mailers for negatively campaigning against him—claiming that he broke a campaign promise.

“I wish Paul the best in the months to come. However, I cannot endorse him,” Bernier wrote.  “While I strongly disagree with Tom Hodgson’s policies, I have known him for many years and he has never been dishonest with me.”

McNeil, meanwhile, has endorsed Heroux in the General Election.

While the Sheriff’s primary election was a close and contentious race, many state-wide candidates saw landslide victories across Bristol County.

DiZoglio, who defeated Brookline activist Chris Dempsey, said she and her campaign saw Bristol County as an important place to reach out to voters and that it can help bridge a divide between the state legislature and the rest of the commonwealth.

“We worked hard to connect with every voter possible,” DiZoglio said. “Bristol County, and communities across our state, made it clear that people want an auditor who will stand up to powerful Beacon Hill insiders by auditing the legislature, conducting a safety audit of the MBTA, and investigating the abuse of taxpayer-funded NDAs.”

In North Attleborough, Healey won the most votes of the five candidates with a total of 1,979. Her opponent, State Senator Sonia Chang Diaz (D-Boston) won 326.

In the Republican primary, former State Reps. Geoff Diehl and Leah Cole Allen were successful in winning their races for Governor and Lieutenant Governor. Diehl and Allen were endorsed by former President Donald Trump.

Doughty, who claimed throughout the campaign that Diehl would not beat Healey in an election, endorsed him the following day. He said party unity must be a priority for Republicans when the general election starts in November.

“Our goal is to still make Massachusetts affordable again,” Doughty said in a press release. “We hope that people will unite to support candidates up and down the ticket.”

In 2018, 2,489 voters in North Attleborough participated in the midterm elections. 1,333 of them requested Democratic ballots while 1,144 requested Republican ballots.  This year, however, turnout increased to 3,757, with 2,360 voters choosing Democratic tickets and 1,397 choosing the Republican slate of candidates.

Both of them ran unopposed in the primary election.

“I am thankful for the support we received yesterday,” said Scanlon. “We have accomplished a lot and have more work to do. Together, we can move forward to tackle the tough issues facing our community; of which there are many.”