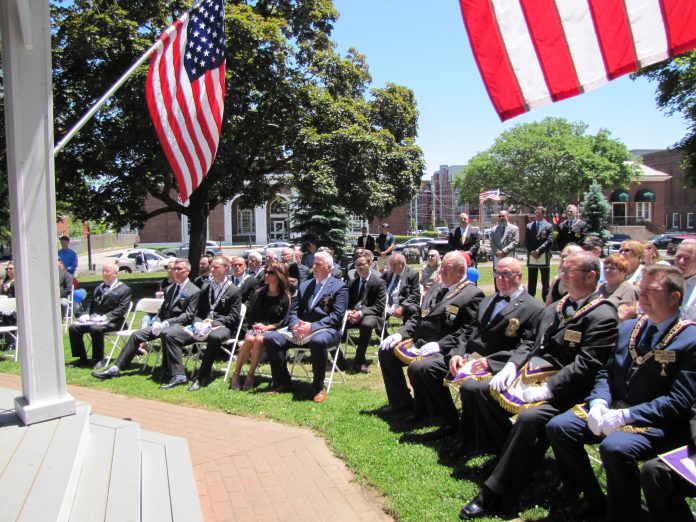 For more than 200 years, the Bristol Lodge of Freemasons has been involved in the community through a number of ways.

Earlier this month, the community showed its appreciation by attending the lodge’s 225th anniversary and re-dedication ceremony. Held on June 4, the ceremony was attended by the Grandmaster of the Masons of Massachusetts, his officers, and more than 175 people. The Bristol Lodge’s Worshipful Master Derek Hindle said this was an important milestone for an organization that can trace its roots back to Paul Revere, who signed its charter.

“It goes back to the roots of the moral foundation of our country and where we stand as a fraternity,” he said.

Secretary Tom Mackenzie said the lodge was chartered in 1797 in Norton and moved to its current location in North Attleborough—on S. Washington Street across from Town Hall—in 1928. The original location is now home to Wheaton College, and the school’s founder was a past master of the lodge.

“To this day there remains a granite monument marking the spot where the original lodge was,” said Mackenzie.

The re-dedication included what is known as the Carpet Ceremony. The group placed symbols of corn, oil, and wine onto the Masonic Carpet, which Hindle said represent success and peace. Former State Rep. Betty Poirier was in attendance, and Hindle said she’s been a friend to the organization for years. Getting to host the event without any COVID restrictions was very important, Hindle said, especially since it was a year in planning.

“We had to restrict our numbers (during the pandemic) and were closed for several months,” said Hindle. “It was nice to able to say we’re out and celebrating.”

Hindle said that the goal of the lodge is to “make good men better” and has opened its doors to the community. The group holds an array of fundraisers, and recently brought in $10,000 for the World War II Memorial Pool. The Masons present scholarships to high school students and offer the lodge at no charge for the Boy Scouts to hold meetings. Hindle said some organizations, such as the Scouts, are based in part on the Masons.

“Each lodge is situated in its own community and is unique to the needs of the community,” said Hindle.

The Worshipful Master said that with the re-dedication ceremony complete, the lodge feels refreshed and the Masons are working on other ways to help the town. He said that it’s humbling to be stewards for the brothers who came before them and the ones that come after.

“We’re now working to keep going and growing and evolving as a lodge, evolving as the community needs us,” he said. “We’re going to be here, God willing, for the next 225 years.”

Amvet Boulevard students advocate for change in the cafeteria