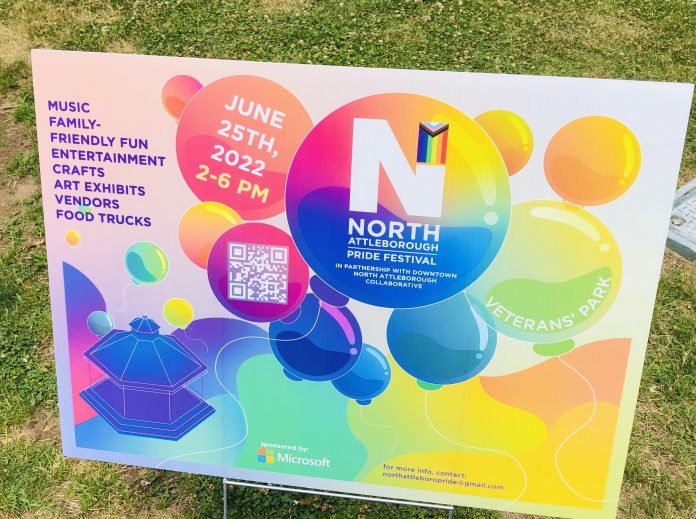 Sarah Cenedella hopes that after this weekend’s North Attleborough Pride Festival, there will be increased awareness about issues related to the LGBTQIA+ community.

Cenedella and Christabel Sheridan—along with a dedicated team of volunteers—spent the last two months laying the foundation for this event, which will take place on June 25, 2-6 p.m. at Veterans Park. They are both very active in LGBTQIA+ awareness in their workplaces—Cenedella at Citizens Bank and Sheridan at Microsoft—and wanted to do something similar for the town.

“I wanted to build a Pride event and she (Sheridan) wanted to help,” said Cenedella. “It turned from a little idea into a plan.”

Pride Month is celebrated annually in June to honor the 1969 Stonewall riots, and works to achieve equal justice and equal opportunity for lesbian, gay, bisexual, transgender, and questioning (LGBTQ) Americans. Cenedella said she refers to the community with the acronym LGBTQIA+, which stands for lesbian, gay, bisexual, transgender, and questioning, along with intersex, and asexual or allies. The + stands for those who do not identify under those terms.

Cenedella said the community has been very supportive of the idea, particularly Town Manager Michael Borg and the Downtown North Attleborough Collaborative. Cenedella and Sherican sought advice from groups such as Safe Schools, the Attleboro chapter of Parents, Family and Fiends of Lesbians and Gays, and the North Attleborough High School’s Gay-Straight Alliance. Four members of the NAHS group even joined the festival’s planning committee.

“It’s really important for us to make this a family-friendly event that really represents the town,” said Cenedella.

Town Council President Justin Pare, State Rep. Adam Scanlon (D-North Attleborough), and TJ Rizzo, the new assistant principal at the high school, will speak at the event. Cenedella and Sheridan had asked the students who from the school would be a good choice to address the crowd, and Rizzo was the answer. The organizers will also be present to thank those involved and in attendance.

In a written statement, Scanlon said the town has a long history of traditions and events to bring to joy to its residents. But the community should lift up all segments of the population, especially those in the LGBTQ+ community that feel like they have been ignored.

“For a long time, I never thought something like this event would ever happen here. However, our community is changing and a group of residents that helped put this event together want to meet those changes head-on,” he said. “North Attleborough is a home that belongs to all of us, no matter what side of town you live on. As a gay man, I am proud to be a part of a community who’s residents and leaders seek opportunities to make our community a more welcoming and inclusive place for all.”

Cenedella said there will be more than 30 vendors, T-shirts made for the festival, and a moveable wall provided by the high school where people can draw or make art that shows what Pride means to them. There will be performances by the School of Rock and a family-friendly group of drag queens, and North resident Brian Cady-Welch will be the DJ. Seth Antonitis will lead a group of children in a bucket drum performance.

“We want to create a community of inclusivity,” said Cenedella.

Cenedella said that over the last couple of years, previously marginalized groups have begun to have a voice, and combined with the increased diversity of the town, it seemed the right time for this event. She pointed out a recent walkout at the high school over homophobic and transphobic comments as another sign that this needed to happen. Before moving to North Attleborough Cenedella lived in Easton. The town recently launched a Human Rights Committee and she was inspired by their accomplishments, which included a town-wide proclamation on anti-racism in March 2022.

After the festival, Cenedalla hopes that people begin talking and that there is an increased awareness of the LGBTQIA+ community and what is important to them. She wants this to expand to human rights for all, and mentioned a possible Juneteenth ceremony.

“I am interested in making this town a better place,” she said. “There are a few places to start. Having conversations is probably the next step for us.”

Cenedella said there is both an internal and external purpose to the event. Internally, she wants the town’s LGBTQIA+ community to understand that they are a part of the town and that Pride Month is being recognized. Externally, she wants those living outside of North Attleborough to see the town as an inclusive one. Cenedella said that she’s not political and this event isn’t meant to appeal to certain parties.

“These are real people, living their lives and having families,” she said. “This is not political to any of them—they’re just trying to live.”