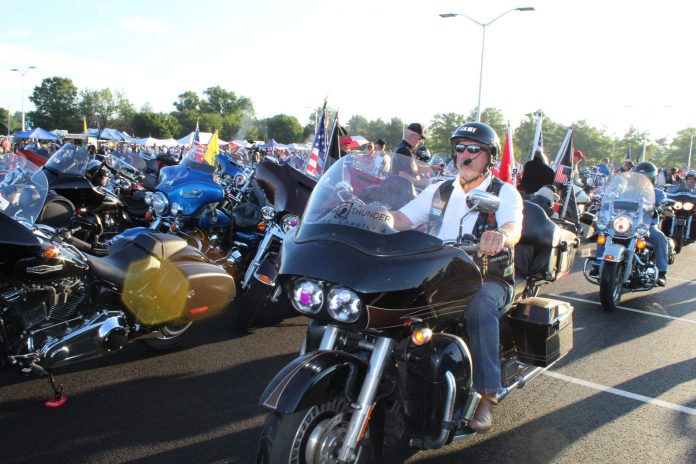 This Sunday, riders from North Attleborough and beyond will take part in the first Rolling Thunder New England.

Rolling Thunder is a national organization made up of 90 chartered chapters throughout the United States. Normally, its members hold their rally to honor POW/MIAs and America’s fallen in Washington, D.C.

However, due to the cost and logistics of the event, the decision was made to let the individual chapters hold their own rallies or work with area groups. Larry Brunell is president of the Rhode Island chapter, said that the eight chapters throughout New England will be sending members to the event, being held on May 30.

“It’s the first one here and I think it’ll go off well and I hope it keeps getting bigger,” said Brunell, a resident of North Attleborough.

The ride leaves from Plainville Park Casino at noon and heads down Route 152 to Route 118 to arrive in time for the annual Fall River Memorial Day Rolling Tribute which starts at Battleship Cove and the newly-decorated Vietnam Veterans Memorial Wall at Bicentennial Park at 2 p.m.

Incorporated in 1995, Rolling Thunder Inc., Is a class 501(c)(4) non-profit organization. Brunell said the organization began in 1988 with veterans unhappy with the way they were being treated by the government. In its first year, the event drew around 200 riders. In 2019, their final event in Washington, more than 1 million took part.

Brunell said that the organization holds fundraisers throughout the year and helps veterans in need, from arranging bill payments to building wheelchair ramps to buying Christmas gifts. Brunell said that the event wasn’t the first idea, but that it feels good to be holding it.

“It’s nice to get back on the road and get back together and get on with the mission,” he said.