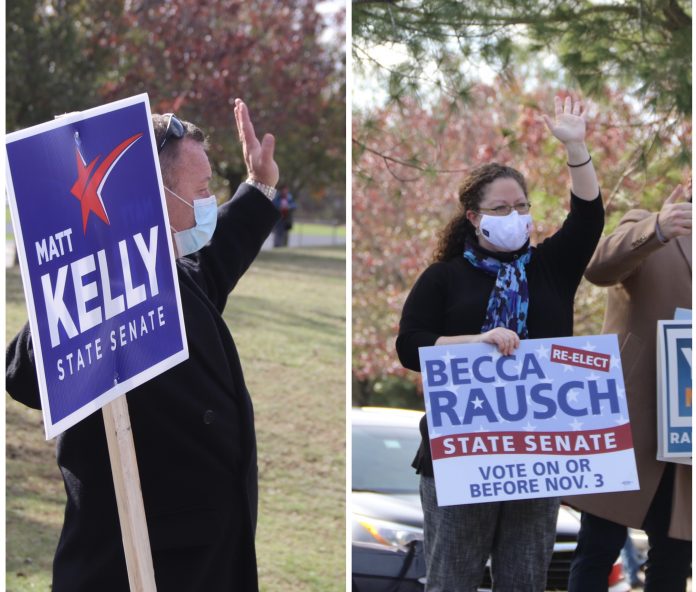 Though this election has been far removed from what they wanted it to be, senate candidates Becca Rausch and Matt Kelly said they are proud of the work they and their teams have accomplished.

State Sen. Rausch, who is running for re-election, said live events and door knocks had to be replaced with Zoom sessions, phone calls, and text messages in an effort to protect residents from COVID-19. She said her team made it work and created a sense of camaraderie among voters.

“I definitely miss that,” she said. “I miss the moments where we could come together in person.”

Kelly, a member of the Franklin Town Council and Rausch’s challenger, said he has no regrets over what could not be done, and focused on the 20,000 doors knocked on and 100,000 e-mails sent. Kelly held some in-person events, though these were socially distanced and held outdoors.

“My team has been phenomenal getting us to this day,” he said.

Both candidates made their way to multiple polling locations in North Attleborough, Attleboro, Franklin, Natick, Needham, among others, and saw large turnouts in several communities. Kelly said that people are excited to vote, and worked to overcome any backups. Rausch credited the town clerks and poll workers, saying that they made these elections possible.

Throughout the campaign process, both candidates avoided cheap shots and tactics, preferring to focus on the issues. Kelly said that was his goal, and a quality people wanted in their senator.

“It’s been great, we’ve had a great response,” he said.

Rausch said the voters deserve a clean campaign and doing otherwise is a disservice to them. This is Rausch’s first time running for re-election, and one either “runs unopposed or runs scared,” she said jokingly.

“This has been a tremendous success and an overwhelming show of support,” she said.