Whether you run a restaurant, a retail store, or any other kind of business for that matter, the last five months have been a strange and difficult road.

For many, March through June was a wash as most stores were forced to close as a means of mitigating the spread of COVID-19. Most eateries switched to delivery or takeout and other stores did the best they could with online orders. In June, some semblance of normal returned as stores were able to open and later in July when outdoor dining was allowed.

Adjusting to the times

North Attleborough’s downtown area, normally abuzz with activity on any given day, became a ghost town through the spring and part of the summer. Some activity has returned, and the formerly quiet streets are now seeing activity as patrons go to their favorite restaurants or check out the other stores.

Ceil Weeman, who owns the Mad Moose Saloon, said that between her outdoor seating both in front of and behind the restaurant and the limited indoor tables, business has been OK. However, sales have been only half of what she would normally see this time of year. The dine-in patrons have been equal to those utilizing takeout, which is still offered.

Inside, the seating has been rearranged to accommodate social distancing, and the result is four two-person tables next to the bar and an equal number on the other side of the room, as well as three up front. Those nearest the bar have proven popular, as people can watch TV while they eat and talk. All told, she’s down six tables, but remains optimistic.

“I’m trying to make the best of everything,” said Weeman. “I’m hopeful for good news. The owners should have all the opportunities to keep their businesses afloat.”

Derek Brooks hadn’t had much time with his new business, Socks Etc., before the pandemic hit. Ironically, his one-year anniversary as the owner is coming soon, and while he still does a lot of business online, people have come back to the physical location.

“I can’t compare to last year, since we opened after Labor Day, but I expect it would be busier if things were normal,” said Brooks.

Brooks is also an Attleboro teacher and will keep the business open six days a week after classes resume. He’s begun putting out the fall products, wanting his customers to have everything they need.

“Overall, people seem optimistic,” he said of the other owners. “We’re all hoping to get back to what we were.”

Ted Oven runs Northeast Trading, and sells firearms and related equipment as well as fishing bait and tackle. There was a run on firearms in the early days of the pandemic, which cleared out much of his stock. With manufacturing plants that make firearms operating with diminished workforces, refilling his shelves has proven to be impossible.

“They’ve come back but in some cases they need one part and there’s an 18-week lead time,” said Oven. “It’s fractured, the entire manufacturing situation is fractured.”

When Oven first opened his business, he didn’t intend to sell bait and tackle. There had been such a store before he came along and decided to include it. Now, it’s keeping the business afloat, but the season will soon come to an end, and Oven isn’t sure what he will do after that.

“I deal with stores up and down the coast,” he said. “Bait and tackle sales have been OK. I’ve missed around 800 sales [of firearms] due to lack of stock.” 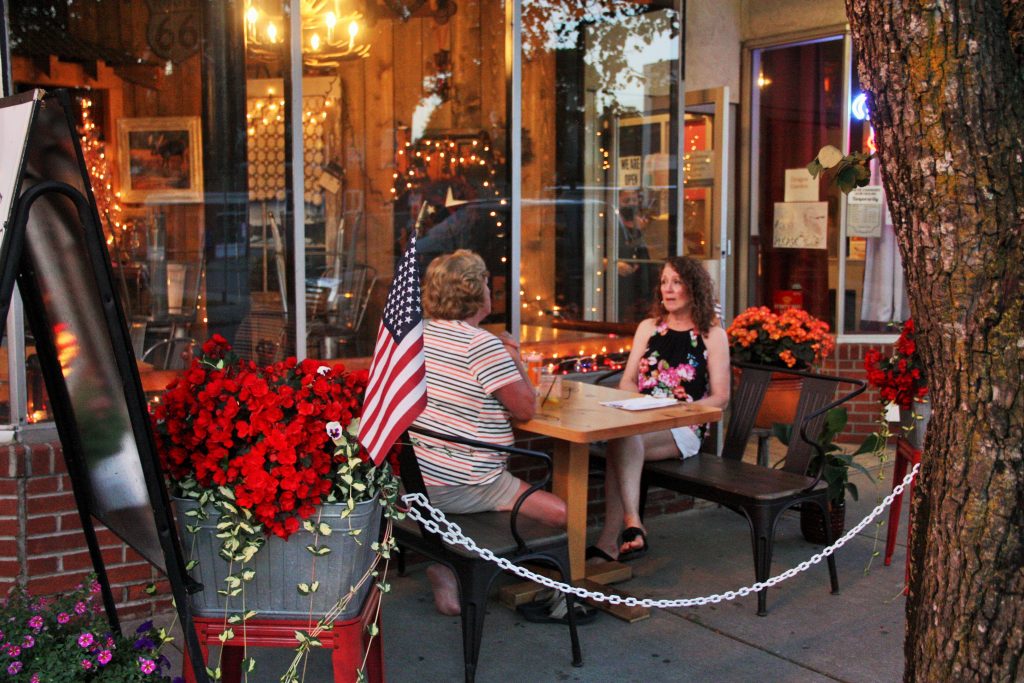 Patrons enjoy the outdoor dining at The Mad Moose Saloon in July. Many businesses switched to this as indoor service was not allowed at that time. Staff Photo/Max BowenHome improvement sees a boost

Companies which focus on updates to the home have seen a positive swing after weeks of closure. Farrah Graham owns Beach’s Flooring with her father, and said that’s the case with their business. She said people have been “reinventing their homes” since travel isn’t an option. The new regulations have made installations a bit challenging, but they’ve adjusted. Beach’s closed in March and opened on June 1.

“No one wanted us to be in their homes anyway,” said Graham. “We did a couple of commercial jobs [in places] that were empty.”

When Beach’s reopened, it was to both new customers and those that put their planned renovations on hold during the pandemic. The result has been a substantial backlog that they’re still working through.

“People will be nervous about crews being in the homes, that’s still the case,” said Graham. “It’s a legitimate fear.”

Cliff Leonard, who owns Countertops Express, said that housing has been the one bright area of the economy. He closed on March 23 and reopened on July 6, and said that since then, business has resumed a normal pace. He said that with people stuck at home for so long, they’ve had a lot of time to get a good look at their surroundings and see what needs to be changed. Between vacations not being taken and tax returns arriving, some have the money to take care of larger projects.

“People home and working from home, they’re making improvements to the home,” said Leonard. “There’s plenty of time to talk about it.”

Matt Slobogan, who owns The Preservation Framer, switched to an online business model, and since early June has seen familiar customers return as well as new ones. He said people are taking the money they’d set aside for vacations that can’t be taken and using it for framing projects instead.

“There’s been spillover into other industries,” he said.

Business at The Preservation Framer was good in January, said Slobogan, then down in February, and came to a standstill in March. Since reopening he’s been able to hire a new person, who used to work at Disneyland but lost their job when the shutdown happened. They bring a background in illustration to the table and designed the store’s new sandwich board sign.

“It’s still up in the air,” he said. “If there’s another lockdown, we’re going to be back to where we were.”