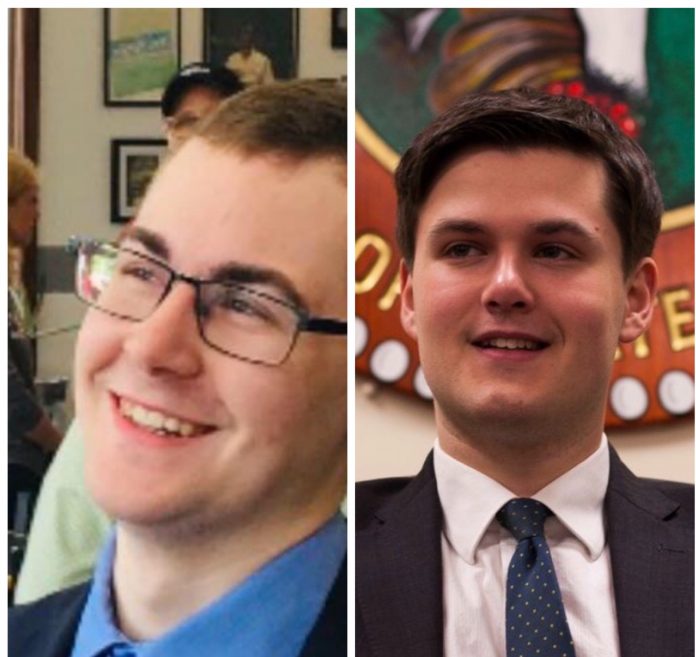 Two young politicians vying to be the Democratic candidate for State Representative squared off in a debate that focused on post-pandemic development and how best to benefit local business.

Town Councilor Adam Scanlon and former Selectman Patrick Reynolds had much to say on these and other issues in a discussion forum moderated by North TV Executive Director Peter Gay. Due to COVID-19 restrictions on indoor gatherings, the normal panelist format was not utilized, and questions were submitted to Gay in advance from the North Star Reporter and Sun Chronicle columnists Mike Kirby and Bill Gouveia.

Scanlon and Reynolds are both running for the Democratic candidacy for the State Representative seat long held by Betty Poirier. Poirier has chosen not to run for re-election after more than 20 years. Town Councilor Michael Lennox is running for the seat as well, as a Republican. He has no challengers for this candidacy.

On the subject of businesses, both Scanlon and Reynolds showed that this subject has been on their minds. Scanlon called for a widening of the qualifications for the Commercial Tax Credit, which only a small number of businesses can take advantage of. Reynolds said the town has seen a great deal of new growth, from the vast expansion of the downtown area to the new apartments being built on East Street.

“The small businesses are being crushed by the pandemic, and they need to reopen safely,” said Reynolds, who served as selectmen for two terms. “That’s where the jobs are in the local communities.”

The two also spoke on the redevelopment of derelict properties. The East Street apartments are an example of this, and the vacant ABC Vacuum building on Route 1 will become a Pawtucket Credit Union branch in 2022. Reynolds said that working with the selectmen, they established the small business tax credit and cited parcels such as the Courtois property, set for redevelopment following an examination for contaminants. Scanlon has submitted a bylaw change for blighted properties and created the Economic Development Subcommittee. Scanlon said it’s important for local leaders to work with those in the State House to ensure North Attleborough remains an attractive community to new businesses.

“I look forward to supporting these businesses any way I can,” said Scanlon, who also served as an RTM and on the School Committee.

With much of the town re-opened following the COVID-19 lockdown, how to rebuild from the damage is on the minds of many. Scanlon said more testing is needed, as well as PPE for first responders and funding for schools, which have made a number of changes for the upcoming academic year. Reynolds said rebuilding is on his mind from the moment he gets up and getting more resources is key. He added that the town’s Stabilization Fund has helped ensure cuts to services don’t need to be made.

“We need to make sure the town gets its fair share of COVID relief funding,” said Reynolds.

The debate also included a chance for the candidates to ask questions of one another. Reynolds asked Scanlon about a recent vote he cast to not transfer funds to the town’s Stabilization Fund. Had this been done, it would have improved the bond rating and saved money. Scanlon said he stood by his choice and that there were other needs. Reynolds said that while he was on the board, they were able to both allocate money to this fund and improve services.

“I felt it was more important to fund other things,” said Scanlon. “We need to support our teachers and public services with the money we have.”

Scanlon asked Reynolds to speak on charter schools, and the latter said he would support local schools, being a product of them. Scanlon’s position on this was similar, saying that he wants the towns to have a say in future charter schools.

“North Attleborough has seen a tremendous increase in new resources,” said Scanlon. “We fought to get more funding for the school district.”

The State Primary will be held on Tuesday, Sept. 1. All precincts will vote at the North Attleborough High School.