Through her work with the Fuel For The Weekend program and parent teacher groups at the Community and Roosevelt schools, Sarah Stone has become well known in the North Attleborough Schools.

Now, that experience will be brought to a new role as a member of the School Committee. Stone topped the ballot for two seats on the committee, earning 576 votes. James McKenna, the current committee chair, received 463. Committee member Talia Yourell and challenger Martin Tragni were also on the ballot, receiving 343 and 155 votes, respectively.

Stone said she was grateful for the support that her campaign received and is excited to get to work. She was concerned about her message reaching enough people, particularly when running against two incumbents, and felt working with Fuel For The Weekend helped in this regard.

“We’re heading into a really tough year and a lot of challenges,” she said. “I can’t wait to get started.”

McKenna has been on the committee since 1999, and also served on RTM, the Charter Commission, and the Democratic Town Committee. He said being re-elected was a reflection of the work that the committee has done. He thanked Stone and Yourell for their positive approach and working as advocates for feeding and protecting children.

“I’m thrilled to be voted in again by the people of North Attleborough,” he said.

This election saw a small turnout, with only 911 voters getting to the polls. This is 4.33 percent of the 21,031 registered voters.

The election was originally going to be held April 7, but the pandemic caused it to be pushed back to June 30. Stone said it was a long campaign, recalling how she pulled papers just two weeks before the pandemic hit. McKenna said that many were focused on looking after their loved ones and following rules on social distancing and staying home when possible.

“It’s unknown what the future holds,” he said. “We just have to see how things play out.”

Dale Langille, who has been on the Board of Electric Commissioners for the last three years, received 659 votes, besting challenger Robert Cote, who received 187. In a race for two seats on the Park Commission, incumbents John Ruppert and Thomas DiFiore retained their seats, receiving 419 and 528 votes, respectively. Challenger Daniel Knight earned 385. 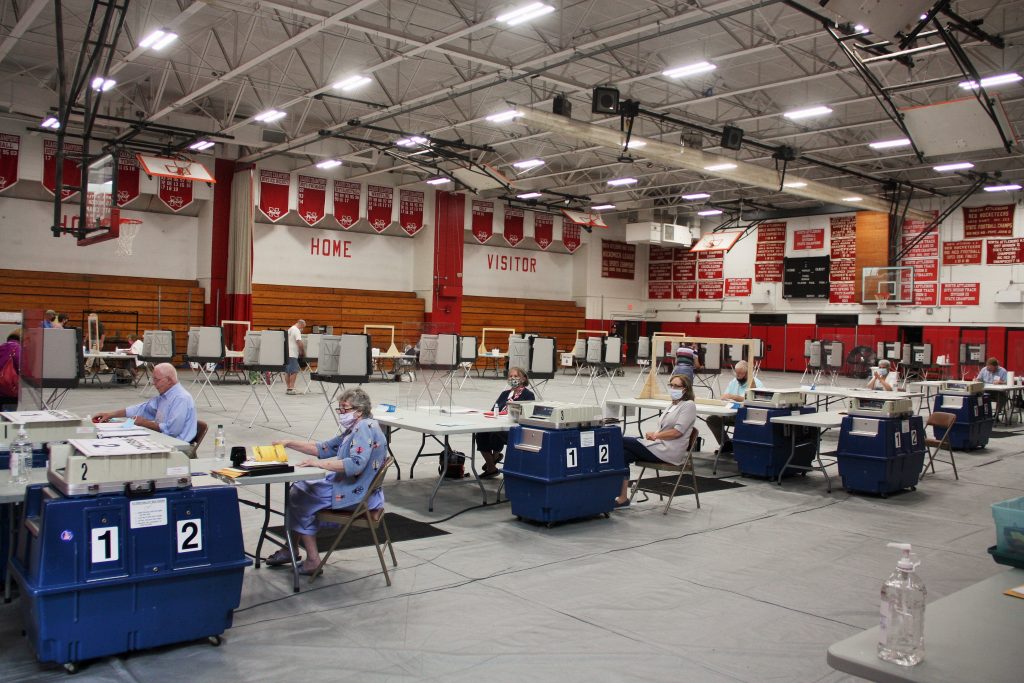 By 1 p.m., the polls at the North Attleborough High School had only seen approximately 300 voters. A number of measures had been put in place to protect the public health, such as masks for the poll workers and plastic dividers. Staff Photo/Max BowenAt the polls

This year’s Town Election got off to a slow start, but picked up later in the day. As the closing time approached, more people arrived at the high school—the only polling place with Showcase Cinemas closed. At 1 p.m., approximately 300 people had cast their votes, according to Precinct Warden Stu Britton. At most, he said there had been 10 voters in at a time.

“It’s understandably slow,” he said. “It’s not the usual ebb and flow.”

A mail-in option was allowed for those uncomfortable going to the polls. The Election Office sent out 152 mail-in ballots and got 133 back. Two hundred absentee ballots were sent out and 109 were returned. Pat Dolan of the Election Commission said there were no complications, but she was hoping that more would utilize the mail-in method. In some cases people got their applications for the mail-in ballots in past the deadline, and were told they could vote at the polls.

Inside the high school, a number of changes had been made to protect the public’s health. The poll workers all wore masks, and plastic dividers were set up at each table. Markers used to fill out the ballots were sanitized before being used again. Britton credited the plans made by the Election Commission, that they had been thought out and well engineered.

Barry and Terry O’Neill were among the last to make it to the polls and say they make it as often as possible.

“We owe it to the candidates,” said Barry.

Christine Kristeller said voting in the local elections is important and that the town should support those that run for office. She said the new structure of the election—with mail-in voting and social distancing measures—gave a look at what September and November may look like. When she first voted in 1972, Kristeller said she was more focused on the larger races, such as for Congress, but for years has been participating in the local elections.

“Be part of the solution,” she said. “Not the problem.”