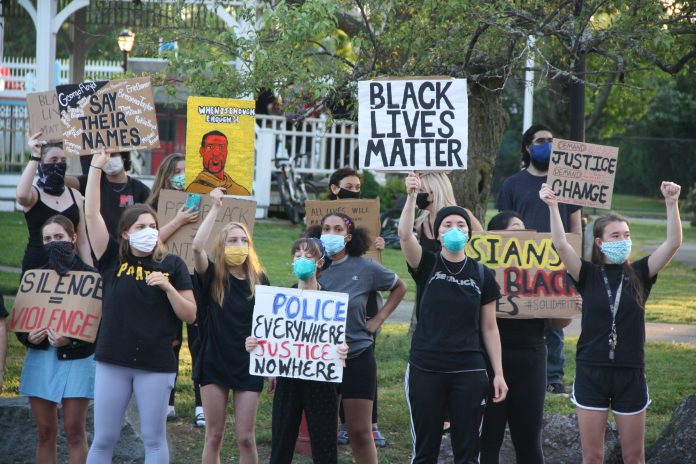 When plans were being made for a march for Black Lives Matter in North Attleborough, it was expected to be a very small crowd—instead, nearly 100 people stood outside Town Hall and shared their message.

The group which took part was mostly made up of current and former NAHS students, as well as several in college. Many older people were in the crowd as well, which formed at 6:30 p.m. outside First Baptist Church, marched down North Washington Street, and dispersed at 8.

“It takes a few people to make a difference,” said Jocelyn Jackson, an NAHS student who helped organize the march on Wednesday, June 3, with fellow student Hannah Demarco.

Jackson said the idea came about after she saw a few high school students holding signs as part of a protest. Her friends recommended she let others know of the march, and on the morning of June 3 she posted a flier to Facebook. She hopes that another such demonstration can be arranged soon.

“I think we need to teach people to be anti-racist,” she said. “It’s not enough to be non-racist.”

North Attleborough Police had been notified of the march, said Jackson. At no time was there any violence, and protesters spoke to a sincere desire to see things change.

“It’s making a difference,” said Jackson. “You see it in history, you see it in the results, in changes to policies.”

People held signs that read “Black Lives Matter,” “Together We Stand,” and “Color is Not a Crime.” They chanted “No justice, no peace,” and the names George Floyd and Breonna Taylor. Taylor was killed during a police raid of her home on March 13, and Floyd died on Memorial Day after he was pinned down by a white Minnesota police officer. Horns honked as people drove by, offering their support to the passionate group.

Two of those in the march, Heather and Summer, said that there needed to be a voice for the victims. Summer said there was no other option than to hold these protests to fight the injustice that was happening.

“They should have a voice and we should listen,” said Heather.

“We have been silent for so long,” said Summer.

Soevrettte Cinal said she was happy to see everyone at the march, and that people should remember that they are one. Cinal works in a hospital and said that within those walls, there is no discrimination and that it should be the same elsewhere.

“It’s good when you can speak,” she said. “When you can’t, that’s when they torture you.”

Town Councilors Darius Gregory and Adam Scanlon were also at the march. Gregory said it was important to show people an important issue such as this, and for these efforts to be supported by the community. He hopes to work with the organizers should they wish to do this again.

“It’s very peaceful,” he said of the march.

Scanlon echoed this sentiment, saying that he wanted to support the entire community, especially the victims of discrimination.

“It’s important that the community comes together to support the black community right now,” said Scanlon.