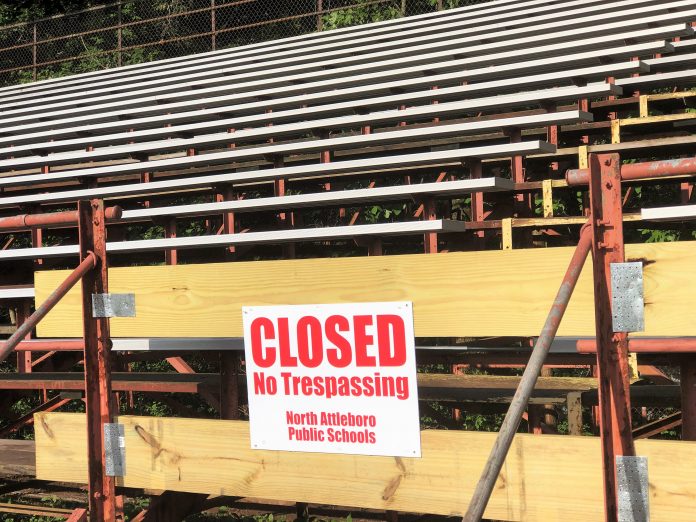 The School Committee has been given an estimate for the new bleachers at the Raymond Beaupre Field, though this is one of a few major repair projects being eyed.

School Committee member Kevin O’Donnell suggested that such a project could be funded through the town’s Capital Improvement Plan. However, Acting Town Manager Michael Gallagher said that in past years, the town had used CIP funds for expenses such as new police cruisers, which are normally paid for through the general budget. This is because they tend to not last more than five years due to wear and tear.

Gallagher hopes that in the near future this money can be used for larger projects that will last 10-20 years. However, he said that a project topping $1 million may be too much for the CIP.

“This is not a good use of your borrowing capacity,” he said.

Gallagher said that a town’s borrowing capacity is based on its annual debt payments and that it’s akin to how much a person makes determining what kind of car they can purchase.

The bleachers were closed in early June following a structural analysis by Odeh Engineering. In its report, the engineering firm determined that the bleachers had “a high probability of failure.” Holcomb’s office had received a number of comments between November and January as to the safety of the bleachers and that some repair work had been done.

Other projects discussed at the meeting were the replacement of the Community School roof, estimated to cost $1 million. Holcomb said leaks had been reported and the roof, well over 20 years, has past its useful lifespan. The track at the Beaupre Field has shown delamination, which can result in bubbles forming in the surface. Holcomb said the track is around 20 years old and at the point where it needs to be replaced, which is expected to cost approximately $500,000.

The district is also speaking to the Massachusetts School Building Authority about reimbursement for large school renovations or building replacements, and Holcomb said if one project gets funded, another may not.

“We want to make sure everyone here knows what we are facing,” said Holcomb.