While the replacement of the bleachers at the Raymond Beaupre Field are seen as a top priority, covering the costs could prove a challenge in the current fiscal climate.

Student Services Director Kyle Kummer said the demolition of the bleachers would cost around $225,000, though he cautioned that this was not a set number. Due to the condition of the site, part of the structure cannot be rehabilitated, and must be removed. When asked on what they could get for the scrap metal, Kummer said it would be “pennies.”

“At another time, when we had appropriate funds for the field, the bleachers would be included,” said Kummer. “As of late, the money has stopped.”

The funds in question came through the Town Meeting allocations, and amounted to $400,000 annually. It was these funds that allowed the school to build a new turf field. In recent years that stopped when times became tight and budgets had to be cut.

“We all knew where we were and we all know what we had to do,” said Kummer.

In the meantime, Kummer said football games would be held at the Community School field, and temporary bleachers would be placed on the track for soccer and lacrosse games. These bleachers, which have three seating stands, can sit up to 20 people per section.

In early June, the bleachers were closed following a review by Odeh Engineering. In its report, the engineering firm determined that the bleachers had “a high probability of failure.” The bleachers remain closed, with yellow tape blocking access and signs advising caution.

However, the bleachers are not the only repair project for the schools. Superintendent Scott Holcomb said that leaks in the roofs of the Amvet Boulevard and Community schools need to be addressed. In the case of the Community School, the roof is 20 years old, well past the point where it needs to be replaced. In April, a classroom at the Amvet School was closed when tests showed elevated spore counts of aspergillus, a common type of mold that lives indoors and outdoors, and penicillium, the mold used to produce the penicillin antibiotic.

“We have competing issues to deal with,” said Holcomb. “Multiple big-ticket items that cost millions.” 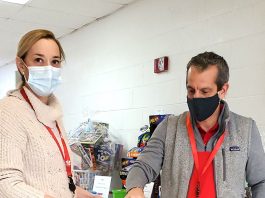 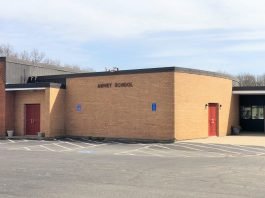 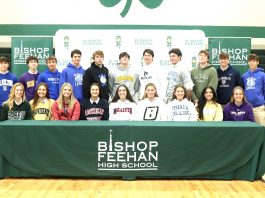