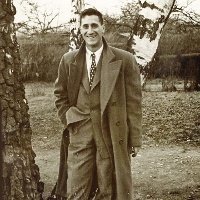 Daniel “Dan” Del Vecchio Jr., 92, attorney and engaged community member, passed into spirit at his home in North Attleborough, MA, on Monday, July 8, 2019. He was the beloved husband of Anne A. (Nardelli) Del Vecchio, to whom he was married on June 4, 1955.

Born on September 9, 1926 in Providence, RI, he was the oldest child of the late Daniel Del Vecchio and the late Maria Grazia “Grace” (Fornaro) Del Vecchio.

Dan was a graduate of Mount Pleasant High School in Providence, Class of 1944, where he earned the state’s first-place medal for Wrestling.  He graduated from Providence College and New England School of Law.

Dan practiced law in North Attleborough for more than fifty years and was a well-respected litigator.  A solo practitioner for his first twenty-six years of practice, in 1992 he joined the law practice of Clapp & Murphy.  Dan had a long and happy association with this team, and felt deep gratitude for the camaraderie of his dear friend, Steve Clapp, as well as their long-time colleague, Linda Braga.

In keeping with his deeply held belief in the constitutional right to representation, for ten years Dan served as the Legal Advisor and Staff Attorney to the Bristol County Bar Advocates, an organization of private attorneys helping clients unable to afford the services of a lawyer.  Dan was also an experienced prosecutor, having worked as a Bristol County Assistant District Attorney and coordinator of nine district courts across Bristol and Barnstable counties. He was an active member of the Massachusetts Bar Association, having served on its Board of Delegates, and served as the Past President of both the Bristol County Bar Association and the Attleboro District Court Bar.

Dan’s path to legal practice was not a straight line.  Drafted by the United States Army while in his second year at Boston University Law School, he was assigned to the Army Counter Intelligence Corps and based in Germany. Returning from the service, he married Anne and went on to work in sales and marketing positions for the Carter Rice and Saxon paper companies. While away in the Army, he discovered that the rules governing law school admission had changed, making it necessary for him to complete additional undergraduate credits before being able to return to law school.  Determined to finish his law school education, Dan took additional credits at Providence College and graduated with a Bachelor of Arts degree in 1957. To achieve his dream, he commuted from Providence to Boston to attend night classes at Portia Law School (now New England School of Law). He finally became an attorney in 1966 at the age of 39.

A passionate advocate for both clients and his community, Dan was given the Massachusetts Bar Association’s Community Service Award in 1990.  In 2006 he received a Lifetime Achievement Award from the Attleboro Area Bar Association, in which he was lauded for having “showed the impact that one good person can make on family, friends, colleagues, and the community.” In 2009 the Diocese of Fall River selected him for its St. Thomas More Award, given in recognition of service to others, which he received during the annual Red Mass.

In 1993, Dan received one of the most significant gifts of his life: a heart transplant.  This enabled him to spend nearly twenty-six additional years with the people he loved, doing what he loved. Dan did not squander this opportunity. He lived his life with exuberance, cherished his family and friends, and had a love of travel and an openness to meeting new people and exploring new cultures. He delighted in cooking for others and, as part of a long tradition, foraging for wild edible mushrooms.

He is also survived by his only sibling and friend of the heart, Ronald E. Del Vecchio, and his wife, Louise Del Vecchio, of Lincoln, RI.

In lieu of flowers, donations may be made in memory of Dan to either the Hockomock YMCA, 300 Elmwood Street, North Attleborough, MA 02760, or to the American Heart Association, 20 Speen Street, Framingham, MA 01701 or at www.heart.org.

For additional information, or to send the family a written expression of sympathy, please visit the online guest book at www.dyer-lakefuneralhome.com.

Arrangements are under the direction of the Dyer-Lake Funeral Home, 161 Commonwealth Avenue, Village of Attleboro Falls, North Attleboro, MA (508) 695-0200.