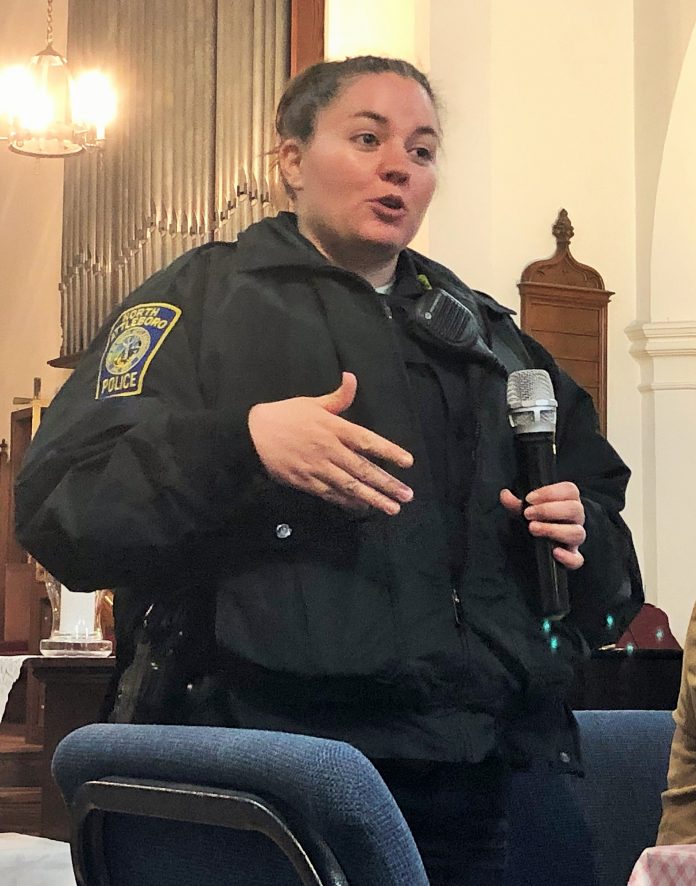 Just one serious incident of bullying can have a lasting repercussion.

Parents learned both the emotional and legal ramifications of bullying at a forum held at Grace Episcopal Church last Wednesday, May 29. Police, a lawyer, and social workers who have all dealt with bullying incidents comprised a panel that gave their own perspectives and took audience questions. Attorney Austin McHoul said that new laws drafted in 2010 give schools the ability to act on a wide range of bullying incidents, even those that don’t take place on school grounds.

“The parents of the bullies should be aware of the fact that there are serious legal implications that can follow you the rest of your life,” he said.

McHoul added that should the bullying be criminal in nature, that record will be made available should the person apply for jobs or to colleges. In some cases, the Department of Children and Families may be notified.

North Attleborough Police Officer Julie Lowe will soon be among the town’s School Resource Officers and said a number of bullying cases that the department deals with happen online. Should this include sending nude or explicit photos, a person may be charged with possession or dissemination of child pornography.

“They think they can say mean things over the phone,” said Lowe. “Words definitely hurt and when you type things, they never go away.”

During the forum a statement was read by Guhan Nandakumar, a North Attleborough resident and student at School One in Providence. He couldn’t attend the forum, but wanted to have his comments read to the audience. He wrote that bullying makes one feel alienated and can cause anxiety and insecurity. In most cases, he wrote that a person bullies because of the power they feel at the time.

Nandakumar said being assertive and respectful is an ideal mentality for responding to bullies, but sometimes responding with negative comments can feel like the only option. In North Attleborough, he said the obstacles in the schools are homophobia and racism, due to the the fact that the community is not radically diverse. In his experiences, bullying that he endured was racially based or in response to his academic successes.

“Conflict is inevitable,” wrote Nandakumar. “Kids are still learning and so to an extent, they must make mistakes in order to navigate social waters.”

Kathy Schlecht and Denise Fox-Barber spoke to the types of bullying and its impacts. Schlecht, a social worker with three decades working in area schools, spoke to different programs to either prevent bullying or help the people involved. This includes group counseling, regular meetings, and daily check-ins when needed.

“We teach the kids to speak out and how to talk things over,” she said.

Schlecht said she trusts the students to work out problems and supports them in their efforts. She agreed that cyberbullying has become a serious problem.

“Often when kids come to me with a problem, they just bring me their phone,” said Schlecht.

Fox-Barber runs a clinical practice on Norwell and focuses on the treatment of children and their families. She said bullying can take many forms, including verbal, physical, and relational [stealing another’s possessions]. One challenge can be encouraging children to report bullying when it happens, that some “dig in their heels” when they’re told to do so. She said parents can help by showing proper behavior, that children often base their actions on what adults do.

“We have to think about how we treat other children,” she said.

This site uses Akismet to reduce spam. Learn how your comment data is processed.

Letters of endorsement for Annie Slobogan